“Asbestos-related diseases (mainly lung cancer and mesothelioma) are the most common cause of death from occupational diseases in the UK.

When asbestos-containing materials are disturbed or damaged, fibres can be released into the air.  Breathing in asbestos fibres can lead to a number of dangerous diseases, although a slight exposure is unlikely to cause disease.  People who are exposed to asbestos can develop the diseases years later.  This is known as the latency period, where the symptoms of the disease are seen a long time after the initial exposure.

Most deaths now are the legacy of the widespread exposure to asbestos, before its use was banned.  Those most at risk today are people who regularly disturb asbestos, like tradespeople.  Working on or near damaged asbestos-containing materials, or breathing in high levels of asbestos fibres, increases the chances of getting an asbestos-related disease.  However there is no threshold exposure below which there is no risk, and all exposures are cumulative.

There are three potentially fatal asbestos-related diseases.  It can take less than 15 years to more than 60 years from first exposure for symptoms to develop.

This is an extract from the Department of Education’s Guidance on Managing Asbestos in Schools. 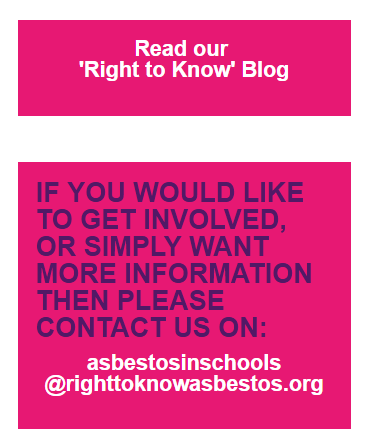